The Duncurra Series currently include three full-length novels set in the medieval Scottish Highlands. Each novel is a complete, stand-alone story. While it’s best to read Highland Solution first, Highland Courage and Highland Intrigue, are completely independent and can be read in any order.

Laird Niall MacIan needs Lady Katherine Ruthven’s dowry to relieve his clan’s crushing debt but he has no intention of giving her his heart in the bargain.

Niall MacIan, a Highland laird, desperately needs funds to save his impoverished clan. Lady Katherine Ruthven, a lowland heiress, is rumored to be “unmarriageable” and her uncle hopes to be granted her title and lands when the king sends her to a convent. King David II anxious to strengthen his alliances sees a solution that will give Ruthven the title he wants, and MacIan the money he needs. Laird MacIan will receive Lady Katherine’s hand along with her substantial dowry and her uncle will receive her lands and title.

Lady Katherine must forfeit everything in exchange for a husband who does not want to be married and believes all women to be self-centered and deceitful. Can the lovely and gentle Katherine mend his heart and build a life with him or will he allow the treachery of others to destroy them?

Her parents want a betrothal, but Mairead MacKenzie can’t get married without revealing her secret and no man will wed her once he knows.

Plain in comparison to her siblings and extremely reserved, Mairead has been called “MacKenzie’s Mouse” since she was a child. No one knows the reason for her timidity and she would just as soon keep it that way. When her parents arrange a betrothal to Laird Tadhg Matheson she is horrified. She only sees one way to prevent an old secret from becoming a new scandal.
Tadhg Matheson admires and respects the MacKenzies. While an alliance with them through marriage to Mairead would be in his clan’s best interest, he knows Laird MacKenzie seeks a closer alliance with another clan. When Tadhg learns of her terrible shyness and her youngest brother’s fears about her, Tadhg offers for her anyway.

Secrets always have a way of revealing themselves. With Tadhg’s unconditional love, can Mairead find the strength and courage she needs to handle the consequences when they do?

Lady Gillian MacLennan’s clan needs a leader, but the last person on earth she wants as their laird is Fingal Maclan. She can neither forgive nor forget that his mother killed her father, and, by doing so, created Clan MacLennan’s current desperate circumstances.

King David knows a weak clan, without a laird, can change quickly from a simple annoyance to a dangerous liability, and he cannot ignore the turmoil. The MacIan’s owe him a great debt, so when he makes Fingal MacIan laird of clan MacLennan and requires that he marry Lady Gillian, Fingal is in no position to refuse.

In spite of the challenge, Fingal is confident he can rebuild her clan, ease her heartache and win her affection. However, just as love awakens, the power struggle takes a deadly turn. Can he protect her from the unknown long enough to uncover the plot against them? Or will all be lost, destroying the happiness they seek in each other’s arms?

Look for the Duncurra Legacy series to begin Summer 2017, which will bring you the stories of some of the younger secondary characters. The first book will be Tomas: A Highland Redemption and feature Tomas from Highland Solution. If it has always bothered you that Ambrose Ruthven inherited Katherine’s birthright, you won’t want to miss this one. There will eventually be books for Ailsa from Highland Intrigue and perhaps Flan from Highland Courage.

For those who prefer to close the bedroom door, inspirational versions of Highland Solution, Highland Courage and Highland Intrigue, which have had all intimate content removed are available. 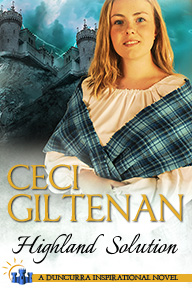 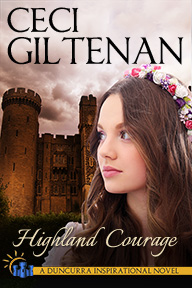 16 Responses to The Duncurra Series