Posted on November 6, 2017 by cecigiltenan

If you’ve been following along for the last 14 weeks, you have met thirteen authors via serial snippets describing a hero and heroine’s first significant encounter. My contribution was one of the first scenes between Tomas MacIan and Vida Ruthven from Highland Redemption.

The full scene is presented below–with the ending. Remember, leave a comment for a chance to win a free e-copy of any of my books. Winners will be announced later this week. 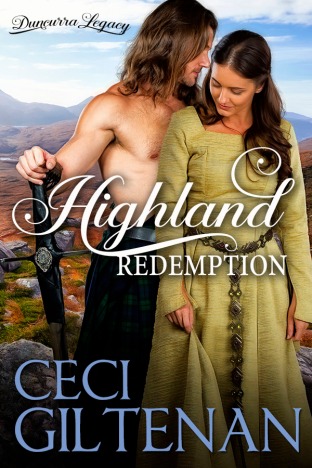 Tomas took the pawn from her hand. “White goes first, make your move.”

Initially he was distracted, thinking of Moyna. She appeared to recognize him. That she didn’t acknowledge it was good. He would have to try and find a way to talk with her. But after the first few less than well thought out moves, Tomas realized he had to focus while playing chess with Vida. He also thought he might have an inkling why no one, especially her father, would play with her—they didn’t like to lose. She was exceedingly good and he lost the first game in minutes.

“Ah, Vida, I made the classic mistake of underestimating my foe. Will ye allow me to redeem myself?”

She gave him a heart-stopping smile. “Of course. I’d love to play another game.”

This time he was prepared and paid closer attention.

Perhaps trying to distract him, she asked lots of questions about the Highlands, his home, and Clan Carr. He did his best to answer without telling too many lies.

“Tomas, tell me, is it usual for men to name their horses?”

“That’s an odd question, why do you ask?”

“I just heard once that seasoned warriors don’t name their horses, but you called your horse Duff.”

“I don’t know if it’s usual everywhere, but the warriors I know name their horses. A horse is not a piece of equipment. It is a living creation of God, and in battle, an extension of oneself. I’ve heard some men name their swords. It seems much more reasonable to me for them to name a beast they depend on.”

“Oh, I agree. I can’t imagine not having a name for my horse.”

“Do you have a horse?” asked Tomas.

Her face lit up. “Yes. A black mare. I named her Mab, after the fairy queen.”

“Really?” Tomas was shocked. “I named my first pony Mab.”

“Nay, I’m serious. An older girl in the clan had told me fairy stories and Mab was always in them.”

“What an odd coincidence. I’ve never heard of another horse named Mab. Even when I named her, some of my more superstitious clansmen warned me that I might be tempting the fairies to work some mischief.”

Tomas laughed, “I never thought about that. I just really liked the name when I was a wee lad.” His grin broadened as another memory came to him.

“What amuses you so?”

“I was just remembering that I liked the name so much, I wanted my parents to name my baby sister Mab.”

She laughed and Tomas delighted in the sound. It enveloped him in a sweet warmth.

“How many brothers and sisters do you have?”

Damn. Tomas had inadvertently revealed more than he wished anyone at Cotharach to know. He’d have to tread carefully. “I have two brothers and a sister.”

“Are any of them married? Do you have nieces and nephews who are pining for Uncle Tomas? For that matter, are you married?”

“Nay, I’m not married and neither are any of them. They’re all much younger. My youngest brother is twelve. My sister’s the oldest of them and she’s but eighteen.”

“My age. Exactly how much older are you?”

He chuckled. He had answered this battery of questions before. Young women at court, anxious to find husbands were no less obvious. “I’m twenty-six, my lady.”

“Eight years between you and your next oldest sibling. My goodness.”

“And your father? Is he one of Laird Carr’s guardsmen?”

“Nay.” Tomas said no more. A discussion about his parents was best avoided and the easiest way to do that was to change the subject. “Who taught ye to play chess?”

She smiled sadly. “My mother started to teach me when I was a very little girl. I learned how the pieces moved and captured other pieces. Before she died, we played some. But mostly I loved just playing with the pieces like they were dolls. I imagined them to be two royal families, with lots of children.” Vida smiled and blushed. “Mama would play that with me too sometimes. I thought it would be fun to live in a big family.”

“Do ye not have cousins?” Tomas knew full well she did—but she might not know that.

“I have cousins in my mother’s family. We visited them some when she was alive, but not since then.”

“He had an older brother who died.”

“What about his children?”

“My uncle didn’t have any children. At least, I don’t think he did. None that lived anyway. If he’d had children, my papa wouldn’t have become laird.”

Tomas scowled. By all the angels, Ruthven never told her about Katherine.

He shook his head, forcing a smile. “Nay, lass, I’m just trying to figure out how to get out of the corner ye’ve boxed me into. Ye didn’t learn to play chess like this by pretending the pieces were dolls. Did yer da continue yer lessons?”

“Nay. Well, I suppose in a way he did. He wanted me to learn how to read and write and do sums. So, he had our priest teach me.” A warm smile spread across her face. “Father James, was wonderful. He taught me so much more than just those basic skills, including chess. He died when I was ten and it was nearly as painful as when mama died.” She sighed. “But he was elderly and in his last year he’d become very frail. He said he was ready for the angels to lead him into paradise.”

Tomas remembered Father James. He was exceedingly kind and Lady Katherine had adored him. Tomas had known he must have surely passed away by now, but his heart ached a little anyway. Almost without thinking, he made the sign of the cross and said a silent prayer for his soul.

Vida had a slightly bemused look on her face. “That was kind of you.”

“Saying a prayer for the soul of a stranger. It was kind.”

A stranger. Right. Tomas had to be more careful. “I…uh…I have known priests who were dear to me. And I suppose it never hurts to pray for the soul of a priest.”

“Nay, I don’t suppose it does. But it was kind of you anyway.”

They played in silence for a few minutes. He realized she was only three moves from checkmate and he had no way of preventing it. Then, to his surprise, she made a move that killed her chance at checkmate and created an opening for him to win. He’d seen enough of her skill so far to know she’d thrown the game intentionally.

He frowned at her, irritated. “Don’t do that.”

“What?” Her tone was innocent, but her eyes told a different story.

“Put that piece back and make the move ye’d intended to make.”

Her eyes grew suspiciously bright and she blinked as if trying to hold back tears. She looked down, quickly and replayed the move.

He hadn’t intended to make her cry. But her pretending to lose was not only insulting to him, it demeaned her. One of her hands rested on the table and he covered it with his. “Lass, ye’re an extremely skilled chess player. Truly one of the best I’ve ever encountered. Don’t belittle that by intentionally losing.”

He suspected he knew what she was trying to say. He reached out, putting a finger under her chin, tilting her head up so he could look into her eyes. “I don’t need to win to enjoy the game. I’m sorry you’ve played with people who do.”

She swallowed hard and nodded.

The game ended quickly, but she didn’t meet his eyes when she said checkmate.

He knocked over his king, conceding the win. “Vida, ye’re a worthy opponent. Especially for one whose tutelage ended when ye were ten.”

Her smile returned. “My tutelage didn’t end when I was ten. Father James was a smart man and a reasonably good chess player, but Father Michael is a master of the game and, frankly, ruthless.”

She laughed outright, the warmth of it filling him again. “Aye, occasionally, but he doesn’t best me very often. You, however, are every bit as skilled.”

“You agreed to call me Vida.”

“Well then, thank you, Vida. I look forward to our next match.”

Her eyes widened in surprise. “Really? You’ll play with me again?”

She blushed. “Stop it. You know what I mean. You’ll play chess with me again?”

“Of course, I will. It never pays to sit back and think one knows everything. The only way I will continue to improve my chess game is to play with people who can best me.”