We are continuing with our medieval first encounters. This week you will find another snippet from Highland Redemption on Nicole Locke’s website.

Below is a snippet from Nicole’s, Her Christmas Knight. 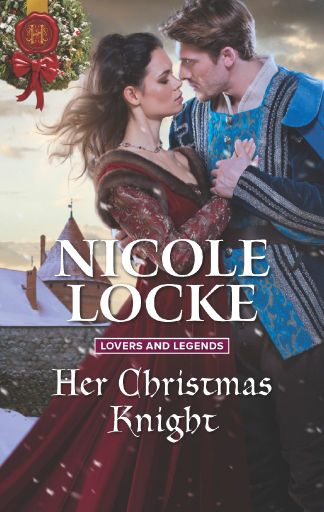 The seal. She had the seal.

How could she have forgotten the game? How long had she been held by Hugh, staring at him as if she…as if she wanted to see him again? Embarrassment did more than warm her skin this time. This time she knew she turned red. Something she couldn’t control. But what she could control was what she did about it.

Putting as much coldness into her features as possible, she looked up. He wasn’t there. The crowd had surrounded her and was pushing her forward. Digging her heels into the flooring, she struggled against the crowd until they suddenly opened before her. With a last push she was released into a small opening.

She righted herself, running one hand down her crumpled dress, and turned to glare at the courtiers—but a glint of red and gold at the corner of her eye shocked her into stillness.

Disbelieving, she turned towards the red and gold of the King’s throne. It wasn’t empty. Instead there was a very tall, very thin bearded man reposing on the ornately carved chair.

Fighting the instinct to hide, she dropped in a deep curtsey. King Edward had returned to the Tower of London and he was staring right at her.

A knight to protect her—this Yuletide

By order of the English king, Alice of Swaffham searches London nobility for the traitor dealing information to the Scots. Little does she know that the mysterious spy she seeks is the man she once loved and thought she’d lost forever…

If Hugh of Shoebury felt unworthy of Alice before, as the Half-Thistle spy he can never claim her heart. Now he must fight to keep not only his dark secrets—and Alice—safe from a vengeful king…but also his burning longing for her at bay!

Continue to follow along as Nicole goes on to Laurel O’Donnell’s blog next week. And be sure to leave a comment below for a chance to win a prize at the end of the tour.

The tour ends next week so be sure to read the conclusion to Nicole’s excerpt on her website and check back here for the final installment from Highland Redemption.