On October 2, I discussed the concept of “Easter Eggs,” hidden messages or references that are intentionally placed in a computer program, television show, book, or other media. I mentioned that there were several “Easter Eggs” in Highland Solution including subtle references to both Star Wars and Star Trek and I promised to reveal these two as they are not spoilers.

The Star Wars reference is an homage to Yoda. In The Empire Strikes back Luke tells Yoda that he will try to do something. Yoda says:

In chapter twelve, on page 96 of Highland Solution, Katherine tells Niall that she will try to do something that he asks. Niall responds in a similar way:

“Try?” he questioned, lifting her chin to look into her eyes. “There is no ‘try.’ Don’t,” he commanded firmly.

The Star Trek reference is much more subtle and has to do with the concept of a “redshirt” character. A “redshirt” is a term that emerged from the Star Trek television series. The Starfleet security personnel who accompanied landing parties wore uniforms with red shirts and these characters frequently died during episodes. So a redshirt is an expendable character who is seriously injured or dies in order to illustrate the peril in which the other characters find themselves. In Highland Solution, the guardsman named “Rab the red” is not only a redhead, but also a redshirt. He is “gravely injured” in one scene.

There is one Easter egg that is specifically for my Irish husband. He says “I believe ye, thousand’s wouldn’t,” when someone tells him something that he is having a hard time buying. In Highland Solution, Fingal says this at one point. Look for it again in my current work in progress, Highland Courage. 🙂

I just saw this and had to add it to this post. I don’t know if it is real or not but if it is, it is a great example of a Star Wars Easter egg in an Indiana Jones movie! 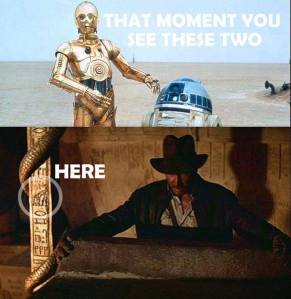