As Medieval Mondays continue, this week you will find the next snippet from my newest book (available now for pre-order), A Wee Highland Predicament on Cathy MacRae’s blog.

Below you’ll find a snippet from Cathy’s, The Highlander’s Crusader Bride, Book 3 in the Hardy Heroines series 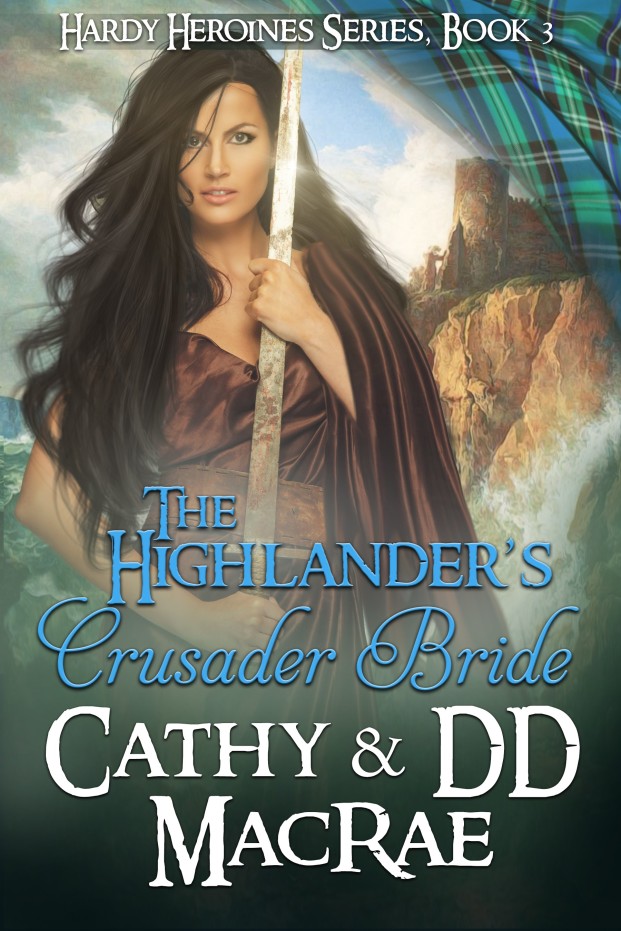 The noise level of the crowd grew and Arbela glanced up. For an instant, Caelen imagined a look of panic crossed her face. He leaned down, his lips beside her ear, ignoring her intoxicating scent.

“How do I get to yer room?” he whispered.

The look she sent him confirmed his suspicion. There was something in this world that frightened Arbela MacLean. The thought of bedding him.

Born in the Holy Land only a few years after the Third Crusade, half-Armenian, half-Scot Arbela MacLean is a true daughter of the desert, beautiful and untamed. Trained to be a warrior to avoid her gentle mother’s fate, Arbela has honed her skills with Turkish bow and arrow, sword and throwing darts—and dreads the day her father choses a man for her to marry.

After more than thirty years in the Holy Land, Donal MacLean, Baron of Batroun, is recalled to Scotland, the last son available to take up leadership of clan MacLean. He brings with him knights, treasure, trade—and a daughter of marriageable age.
Caelen MacKern, known as the Bull of the Highlands, is cynical about women. His first marriage formed an alliance, and he did not grieve when his spoiled, immature bride passed away. He has agreed to marry again—against his better judgement—for the men, means and coin to recover from a devastating pestilence that all but wiped out his clan.

Though more than a little resentful at finding himself forced to remarry, Caelen’s proposal to Donal MacLean’s headstrong daughter nevertheless piques her interest. Each will receive what they want most from life—the ability to live as they please without interference from a meddling spouse. But their marriage of indifference will soon change to one of passion that neither Arbela nor Caelen could have predicted.

Please join Cathy for the continuing excerpt next week at Laurel O’Donnell’s blog.

Don’t forget to leave a comment for a chance to win!